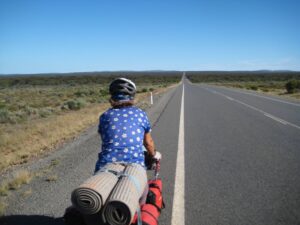 East or west? Did my husband Jim and I dare try to make it all the way to Perth?

It was early May, the time of year the prevailing winds on the Australian Nullarbor Plain shifted. Should we go for it or not? We had eight weeks until our flight home from Sydney; if the headwinds beat us up, we could turn around and ride the tailwinds back, so why not try?

There was also the issue of what the Aussies call road trains. Because the distances are so great in the Australian Outback, the authorities allow truck drivers to hook up not one, not two, but three trailers to their rigs. We had been warned, while a rig might pass us moving five or ten feet out of our way, the length of the road train, coupled with the wind, could result in the rear end swaying an even greater distance. Some of our hosts warned us that the back of the road trains were like the sneaker waves off California’s northern coast, taking cycling victims every year. Jim suggested we stop and pull over for every train that passed us. And it worked. We’d stop and wave many times a day, and the truckers waved back, tooting their horns. We knew it was the right strategy when a trucker sidled on up to us to chat at a roadhouse a few days across, saying he had seen us several days earlier. He liked that we 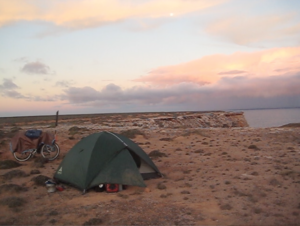 stopped, saw it as a sign of respect, and shared our presence with the other truckers.

Another hurdle was the 1200-kilometer stretch between the towns of Ceduna and Norseman, with a whole lot of nothing in between. Not absolutely nothing but close, there were nine Aussie roadhouses strung along that solitary stretch of the Eyre Highway.

An Aussie roadhouse includes many things, always a gas station and a restaurant. Most had motel rooms, some had campgrounds, though the campsites typically were a plot of shadeless dusty dirt and no picnic tables. Some roadhouses had a separate bank of showers, $2 for five minutes, so popular in the heat that lines formed. And some roadhouses, but not all, sold groceries.

The wind? We got lucky, crossing as it turned out before the wind shifted, benefiting from strong tailwinds ten of our fourteen days. We encountered a half dozen cyclists, in ones and twos, heading east, expecting the winds to have already shifted in their favor; alas, they were not happy. Because of the heat, even with the tailwinds, we averaged only 50 miles a day. Still, after fourteen straight days of cycling, we got mighty hungry. 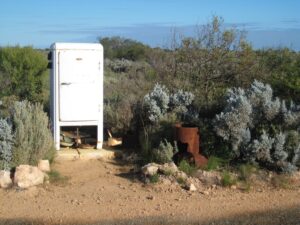 We had to rely on the roadhouses for food and water, but their prices were killer. We carried two days of water, so we had to fill up at every roadhouse. I schemed a way around the exorbitant prices for bottled water by spiriting empty soda bottles, two, three, even four at a time, into the bathrooms, ignoring the forbidden signs. Jim was mortified, so that chore fell to me. The water in the bathrooms was not the greatest, but the price was right considering how much we needed.

Food was another challenge; who knows how many calories we consumed those two weeks. Too many to count. Even if we could have carried a ton of food, which we couldn’t, there was a roadblock 300 miles ahead. The Aussies maintained a strict agricultural quarantine at the border of South and Western Australia. All fresh food was confiscated in both directions, end of discussion. We left Ceduna with a nice supply of fresh fruit and veggies, but the agents would confiscate what we didn’t eat by the border. Once over the border, the remaining 450 miles to Norseman, we’d be dependent on the roadhouses. 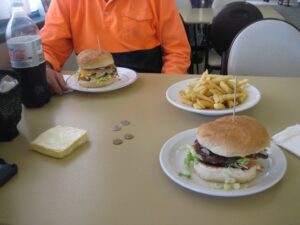 All the roadhouses had restaurants of some sort. That’s where they made their money, selling gas, water, and meals. We quickly learned the best deal on the menu was what the Aussies called “The Lot” – a burger and fries. But it came with much more – shredded beets, carrots, cheese, then bacon, and a fried egg on top. It was more mountain than burger. Plus, a pile of fries and a large soda that we upgraded to milkshakes. Oh, we loved them! Piled them on, every roadhouse, nine times in fourteen days, we devoured them. But the prices, each meal averaged $45.

Some roadhouses sold groceries, pathetic dusty stores stocked mostly with expired canned goods and junk food. We yearned for more substantive fare – eggs and bread, meat or cheese, though the fresh stuff didn’t last long in the heat. Even if we buried it deep in our panniers, we had to eat it before it went bad in a day or two.

While the stores didn’t sell healthy stuff, we knew they had what we wanted in their restaurant kitchens because it was on their menus. So, I’d typically wait until after we finished our meal but before we paid and ask if we could also buy a dozen eggs or a half pound of meat, a loaf of bread, some cheese? A few said yes, but most said no way; prepared food was more profitable. They lumped us in with all the motorists that typically took only a day or two to cross. Few empathized with our predicament, burning calories for two weeks with only dried foods like pasta and oatmeal in our panniers.

That’s how it came to be that I started dreaming of blueberry pie.

Food loomed larger each day, though we were easily distracted by the sheer beauty of the landscape. The Nullarbor is, in a word, magnificent. The sun ruled the roost; the landscape we traversed had evolved to survive its harsh rays and relentless heat. There was a serene beauty in the dry, brittle plants that made a home out there. Awestruck, we free-camped our way across; the motels were way too pricey, and why pay for a campground’s dusty patch of dirt when the landscape was wide open? 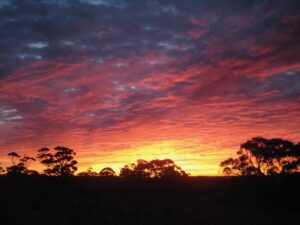 So, we loaded up as best we could on food and water at the roadhouses, then pedaled on to find a place to pitch our tent in the wondrous middle of nowhere. As we cooked dinner, we watched the magic of the desert evening unfold. Twilight brought cooler temps; animals appeared, sometimes herds of kangaroo pounded past us, not too far, close enough to enjoy. We hoped, expected, to see wild camels but never did. Probably they saw us and kept a distance? We camped atop the Bunda Cliffs overlooking the Indian Ocean for two nights in a row. Looking back on the eight years Jim and I cycled the world, between retirement and becoming grandparents, those two weeks stand out, with us against the world, as one of our most transformative experiences. Day by day, the quiet Nullarbor crept up on me and into my heart. I fell in love with Australia as we crossed that magical landscape.

There was plenty of time to daydream; each day, I thought about the lovely slice of blueberry pie I’d order when we got to Norseman. When we finally made it, there was no blueberry pie on the restaurant menu and no fresh berries in the stores, but they did sell bags of frozen blueberries and refrigerated pie crusts – four to a pack.

How’s she gonna bake a blueberry pie on a one-burner stove in a campground, you’re thinking as you read this? If you’ve never been to Australia, you probably don’t know about their campgrounds. They aren’t big on clearly defined campsites; campers park higgely piggley wherever they want on the grass, if any, and on the dirt when there mostly isn’t. Rarely can you find a picnic table. Instead, Aussie campgrounds have a central building with a fully stocked communal kitchen – stoves, barbecues, fridges, pots, pans, dishes, the lot!

Once I made sure the campground oven worked, I went back to the store and bought a bag of frozen berries and a box of crusts and baked a blueberry pie while I cooked dinner. And you know what? We each had a slice, then another and another, until we ate the whole thing for dessert. It was like we’d each developed a hollow leg.

In between batches of wash the next day, our first full day of rest since we left Ceduna, I went back to the store and bought another bag of frozen blueberries. With the two remaining crusts in the campground fridge, I baked another pie, and again we polished it off after dinner—an epic dessert to cap off an epic feat. Now, whenever I see blueberries, I’m reminded we almost bailed on the Nullarbor because of the winds. I’m so glad we rolled the dice.