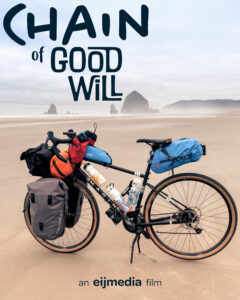 30th June 2019: Dang it, my knee is wrecked. Well, actually, both are; first, my right knee became really painful, and then the extra strain of attempting to go easy on it has injured my left knee as well. Thank goodness for Jim and Fran, just the sort of friendly faces you need in a moment like this. I knew there was a risk of this happening. I knew because Walt had told me that things go wrong when you set deadlines, that it goes against what cycle touring is about. Yet here I was, piling on the miles, attempting to reach my destination in time.

Arguably that advice would have been more useful a week earlier before I had made my plan. On the other hand, that’s an unreasonable complaint, given that a week earlier, Walt and I weren’t even aware of each other’s existence. That’s the funny thing about Warmshowers, people who start as complete strangers often end up having a disproportionate impact on you for the amount of time you spend with them.

So how did I really get into this situation? Well, to start at the beginning, I’m not a long-distance cyclist. No experience at all. I had been in New Mexico since August 2018 on a study abroad program. I had some time left on my visa, and I wanted (cheaply) to make the most of it. Some friends (thanks, Ben, Julia, and Caleb!) had mentioned they would be cycling some of the pacific coast highway, and I thought that sounded like an excellent adventure. Unfortunately, I didn’t have enough time left on my visa to do it with them, but the idea had stuck, and so just a month before I would need to start, I decided to do it and started preparing.

A month later, I walked out of the Seattle-Tacoma airport and was picked up by Walt (along with my bike, which was now packed into a cardboard box). Walt took me to his home, where his wife Deb had saved some dinner for me. I stayed a few days with them, re-building my bike, getting a bike stand, getting comfortable cycling my new (to me) and now fully loaded bike. I had been extremely lucky already and would continue to be. Walt and Deb are both experienced cycle tourists, with tours in both America and Europe under their belts. It became apparent that part of the appeal is the opportunity to indulge in food without any guilt for both of them, something I can now attest to! 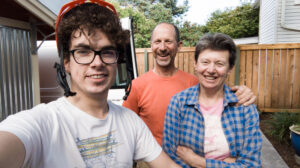 From there, I set off through Seattle city centre to Port Orchard, where I was received by Neal tending to his raspberries in the garden (they were delicious). He made me dinner as we chatted and Anita, his wife, joined us for a very merry evening. Anita is a photographer turned musician now teacher; her father was involved with developing a local bike trail. Neal is a retired school psychologist who worked in international education. It later emerges that the house we are currently in is actually the house he was born in, but they have lived in Greece and Italy, among other places. The next day, after a hearty breakfast provided by Neal, I set off for Shelton under a beautiful blue sky. My route took me along the waterfront and through some beautiful forests.

I stopped at a “mom and pop” style gas station, where I refueled myself with a coffee and some bars. I then bought a baguette for lunch and positioned it on my seat bag such that it might dissuade cars from passing me too close! Just before lunch, I came to the turning for Trails End Road, which, despite warnings about this, I decided to attempt to cycle up. I immediately regretted this but pushed onwards until I almost toppled and then bashfully pushed my way to the top. Definitely felt steeper than the 12% it is rated at! To cut a long story short, I had a wonderful day; only minorly got heatstroke, went for a paddle in Mason Lake State Park, and cycled about 30km further than I ever have in my life.

Carolyn is a complete gem. A shower on arrival, a comfy bed to sleep in, and incessant ribbing (or, in her own words, “harassment”) to make me feel completely at home. She lives in a retirement complex on the edge of town, is working on a puzzle of some marigolds, and threatens (jokingly) to send me a bill. Some other cyclists turned up unexpectedly as they were ahead of schedule, and Carolyn welcomed them in too. We all cooked dinner together and chatted, pouring over maps of the area before heading to bed to rest our weary limbs. 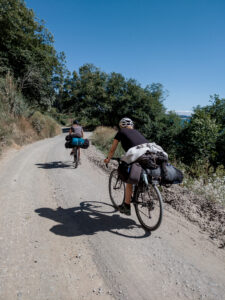 It was the next day that I made the decision to push myself and cycle 100km. Why, you ask? Well, as I recall, my thought process was along the lines of “there is a lack of suitable hosts at 50km, and the whole route looked rather flat, so why not?”. Sometimes even the best of us makes mistakes, and I make a habit of it. I signed Carolyn’s guest book, set off on my way, far later than originally intended. The first part of the day was pleasant in an uneventful way, small quirky towns, and fairly quiet roads. I stopped for lunch by a bridge and contemplated skinny dipping in the river. I opted to wear shorts and was quickly very glad of this when some locals also appeared in the river around 100 yards away.

After lunch, the struggle began, starting with a very slight climb about 10 km long; about halfway into it, a headwind picked up. My cycling inexperience really showed here; headwinds? I hadn’t thought to consider headwinds or the effect they might have! That headwind picked up throughout the rest of the day, effectively adding an extra 25-50 km onto the distance for the day. This is what got me, I think. I felt I had no option but to keep pushing onwards and the lack of experience with this sort of distance meant my technique slowly fell apart as I subconsciously attempted to rest my weary muscles. By the time I reached Jim and Fran, just outside Acosta, I was broken and exhausted. It was so welcoming -the trees close in over the driveway in a green tunnel, with gravel and bark underfoot, surrounding you in trees, ferns, moss, and grass; the house is made from huge timber poles with wooden shingle cladding and huge modern windows overlooking a small lake. 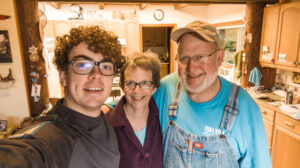 They discovered Warmshowers whilst camp-hosting a few years ago, and the previous year had hosted nearly 20 separate groups. They are both artists in their own right; Fran does rope art with rocks she finds locally, Jim’s latest project is pottery with a sideline in making enormous bubbles. Neither of them are cyclists but have such huge hearts they wanted to invite people in! I gladly accepted their offer of a shower, and immediately iced my knees as much as possible, and cautiously asked if I might be able to stay a bit longer than planned. They kindly let me stay an extra night. Next morning Fran took me around town to get coffee at a trendy coffee shop and then relax at the YMCA centre. I then prepared to catch a bus down to Astoria early the following morning, not wanting to impose on my kind hosts for longer than necessary. Fortunately for me, nearly all the buses either have a rack on the front for bikes or have space inside for them, so I was able to use them with my bike.

My knee didn’t magically get better; in fact, at various points, it got far worse, but I coped, and I had an amazing trip. I would get buses when the option was there, and my knee was bad, or there was lots of elevation to cover, and I would cycle between buses or on days where I felt good. On more than one occasion, I pushed too hard again and ended up having to take several rest days to recover. I camped for most of the rest of the trip because I just loved being outside so much (and the camping facilities were actually so impressive, good work, Oregon and California!). 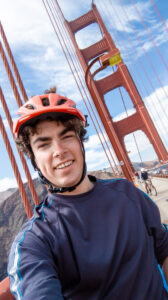 In the Redwoods state park, I ran into some wonderful Swiss girls who were also cycling south, and we formed a temporary group. We were pretty tired after a long sunny day, and the energy levels had been dropping all afternoon. We stopped in Arcata, grabbed some seriously good pizza, and went grocery shopping to prepare for another night camping. As I came out of the supermarket, the girls were excitedly chatting, and I was confused by the sudden change in energy. Surely the sugary treats they had just bought weren’t that effective? It became apparent that while I had been in the shop, the girls had been approached by Carisse, asking them about the huge rucksacks on their bikes. Carisse was a Warmshowers host and, on hearing their story, immediately invited us to stay at her house. This on-the-spot impulsive generosity was much appreciated by all of us, and it makes for a really magical memory. We cooked and chatted and talked about her dreams of bike touring. She was studying at the local university, and we talked about music, politics, and climate change. We still actually talk to this day. It’s funny how people come into your life sometimes, but I wouldn’t have it any other way!

Along the way, I filmed some of my hosts on and off, with no real aim in mind at the time. I was curious why people would be so generous and trusting of strangers, something you don’t often see in our modern, closed-off world. Three years later and I’ve finally edited together what is now a nostalgic look back at the trip, told largely through the stories of the wonderful people I was lucky enough to meet along the way. Looking at it now, I hope it serves as a homage to the Warmshowers community, which I think is only fair given that it is thanks to them that this most memorable of summers was possible.