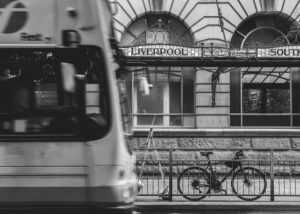 Some time ago, I was riding the Northern States west to east bike route with an American friend.

In southern Wisconsin, we came into a small town, Clintonville, which had no campsite, and the only hotel was full.

There was, however, a bike shop, a rare enough thing in small-town America. While husband Chuck was out on his bike, the Lady in charge was very interested in our trip. We chatted for a while, and I then asked if there was anywhere, we could put up our tents. “You’re not camping anywhere?” she said. “You’re coming home with me.” She shut the shop, jumped on her mountain bike, and we followed her to a large house on a quiet, tree-lined street.

We were shown to our bedrooms, introduced to Watson, the cocker spaniel, and daughter Hillary (Hillary of Clintonville). Then mother and daughter were off to visit Grandma in a nearby town. “The shower is better in our bedroom,” she advised, “and there is plenty of stuff in the fridge. Chuck will be home later, and he knows you’re here.”

The following year, they all came over and stayed a week with us in England. The riders I host from Warmshowers have all been pleasant, happy people, most of whom have contacted us later to thank us and say what a good trip they had.

I look forward to welcoming intrepid bike riders who fly into Manchester, England, to tour the Olde Country. Living on the edge of the very hilly but beautiful Peak Area of Derbyshire, and only 100 miles from the English Lakes, there is much for your members to enjoy….not to mention my wife’s cooking.

After riding 2000 miles from west to east (Minnesota to Maine), I wrote a tongue in cheek letter to the Royal Geographical Society. For many years this august and ancient group had never admitted ladies. Now, the President was a lady!

I wrote that having cycled many US miles from west to east, I had noticed that the hills were much longer going up than going down. The inescapable conclusion was, therefore, that the Atlantic Ocean was higher than the Pacific. I pointed out that this explained why there are locks on the Panama Canal and why sailing ships had experienced difficulties rounding Cape Horn; they were, depending on direction, sailing either uphill or down.

Her reply was a masterpiece of discretion “Thank you, Mr. WAllman, for your interesting observations; you may wish to address our members but, unfortunately, our visitor slots are filled for the next few years.”