Susan and I have been involved with Warmshowers for almost 11 years. Prior to hosting here in Shkoder, Albania, on an annual basis, we never hosted more than 3-10 guests.

We consider ourselves expats. In 2010, we flew with our recumbent trikes to this side of the pond from the USA and started pedaling. We spent our first 3+ years pedaling year-round. When winter approached in year 4, we made the decision to not pedal in the colder months. We also made the decision to share our apartment hosting with this awesome community of bicycle travelers, Warmshowers. We settled here in Shkoder, Albania, finding a one-bedroom apartment with enough room for hosting.

When we opened up our apartment for hosting, we were not aware of the volume of folks who route themselves from the European continent down 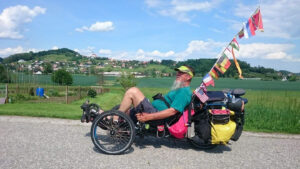 Most of the long-distance cycle travelers choose to pedal through the Balkans during the winter months, avoiding pedaling a second winter when near/in the “-stan” countries in central Asia. The weather along the Balkan coast, between the first week in November thru the middle/end of March, is very wet, with cool to cold temperatures, and heavy winds and wind gusts (known as (Bora Winds”), which can bring chilling lower temperatures.

For folks pedaling, south along the Adriatic coastline, towards Greece, Dubrovnik, Croatia is the last large city before Shkoder, a distance of about 180 km from our apartment. In the winter, it can take 7-12 days to cover that distance because of the weather. Those pedaling from Greece, north into Albania, are pedaling about 350 km of the same wet, windy, and cool to cold temperatures, but, do not engage with the activity of the strong Bora Winds mentioned above. Coming from either direction to Shkoder, in essence folks arrive at our apartment pretty much emotionally and physically spent from dealing with the weather they have been facing over the last couple of weeks. 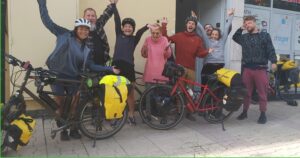 It is this group of bicycle travelers Susan and I open our apartment to, allowing them to emotionally and physically recover from their winter experience of the past week or two in the Balkans, and prepare for the next phase of their adventure. If we are hosting more than 3 guests, we basically turn our apartment into a hostel. We want our guests to relax while here and (when ready) tend to whatever needs they have so they leave feeling refreshed and ready to move. While with us, some may need to connect via the Internet and/or snail mail to family, friends, and others. Some may need to spend time route planning. All are so happy to find there is a washing machine for them to use and a place to hang their tent and gear to dry out. All also find time to hear and share the stories and adventures of others staying here. They are also thrilled to have access to our kitchen, using it to cook meals containing fresh vegetables. It is common to find a couple of cooks in the kitchen, preparing delicious meals to share with everyone.

Our apartment rests over our garage, a garage we use to store the bicycles of our guests. Hugging the garage walls is an inside stairway leading up to the front door to our apartment. Two years ago, we decided to ask our guests to put their hand print on the wall leading up to our apartment, referring to this asking them to “Slap the wall”. Next to their hand print, we ask them to write their name, their home country, and the day’s date. We decided on doing this instead of offering a guest book for them to sign as guest books are not looked at as much and the hand prints would surely get a new arrival’s attention while climbing the stairs to our apartment. As we get more and more “Wall Slams” on the walls, Wall Slams showing the information of previous guests, the more we find new arrivals recognizing names of others they have met on their travels in the Balkans. We had one guest recognize the name of someone they know who lives in the same city in France this guest lives in. We had one traveler recognize a name on the wall of a person he met earlier this summer in Iceland. As can be seen, some folks are rather creative with their “Wall Slams”. There are 3 footprints on the walls, and 3 dog paw prints, too.

We really enjoy watching the bonding develop as new guests arrive. There is always a curiosity as to where each guest started from, what will or might be their final destination, and what was the motivation to travel such a long distance.

Then, the conversations graduate to where have the others been on their journey, what they have learned on their journey, and what routes are they thinking of taking on this journey. On several occasions, guests have adjusted their plans and departed here with other guests as a group; a group which didn’t exist 2, 3, or 4 days ago. We find out later they wind up pedaling together for a couple of days or longer. I know of a few of those newly formed groups whose members are still in contact with each other.

In short, opening our home to Warmshowers travelers has been an experience for both Susan and me which we will never forget. The friends we have made through hosting are so special and to be able to keep in touch with so many of them over these years always gives us a warm fuzzy feeling.