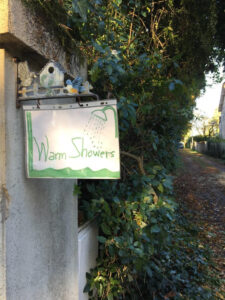 When I became a member of the Warmshowers cycling hospitality platform in 2015, I hoped to get a “2 for 1”. Being hosted while touring on my bicycle and making sure my Dad, a good host, gets some visitors. In fact, this platform brought my family and me much more than expected: we could say I got a “3 for 1”!

I was going on a career break which included touring by bike. But I needed an address to locate myself for Warmshowers, so my Dad offered me his in France. Despite his liking for having guests, he does not usually get many. I thought it would do him good to have some visitors once in a while. I knew it would be a challenge for him, most of the tourists in our area of Dordogne are foreigners, and he barely speaks English. Also, he is still renovating his house. But Warmshowers hosting being free, I assumed guests would not care.

What I did not expect was that my Dad would enjoy it so much. He says himself that it is very “stimulating.”

Coming back from my adventures, I was surprised to find out how he organized himself. With a genuine concern of being a good host, he has a welcome sign at the entrance, makes sure to have local tourist maps to give away, and always has a French-English dictionary near him. He has even decided to speed up his renovations to better welcome touring cyclists. At the same time, Warmshowers being on a volunteer basis, he remains free to enjoy his retirement and does not feel committed to always being home to host. 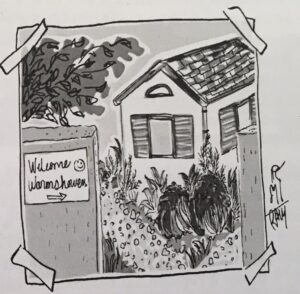 I talked two other family members into hosting; they also enjoy tourism but cannot travel much. They will travel from home! As for me, my touring plans have been postponed, and I have not been a Warmshowers guest yet. In the meantime, while I get ready for my bike tour, my profile builds up with positive feedback, thanks to my Dad!

(Author’s note: this story was published in 2017. Since then, I have started touring and been a guest several times with Warmshowers hosts.)