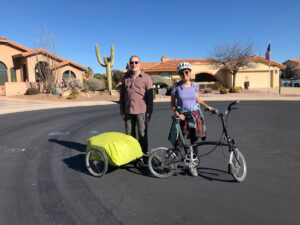 February 7, 2022 – Today I biked 23 miles, almost exactly the same as yesterday. But whereas yesterday’s journey was mostly flat and on a car-free path, today was on Rt. 77.

Fortunately, for most of the way there was a wide shoulder. But I pushed up a slight but relentless incline totaling 1700 feet today, and I battled a headwind for about the second half of that. When I finally pulled into the Oracle Cook Shack for some sweet potato fries, I was definitely ready for a rest!

The ride was scenic, though; the Sonoran Desert landscape continues to enchant me. Sadly, I did see three ghost bikes along Rt. 77 (which one of 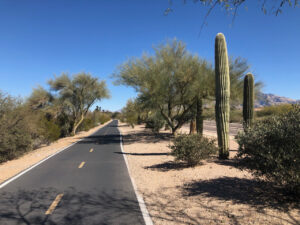 last night’s Warmshowers hosts, Kurt, had warned me to expect.) I was sad to think about all of those cyclists as I pedaled past those three points.

One exciting aspect of today’s ride was when I passed the signs, and then the turnoff, for Biosphere2! I will be taking a tour there with a Tucson friend on Wednesday.

I remember being fascinated by the promise and potential of Biosphere2 when I first started hearing about it, in the late ‘80s and early ‘90s (when I was living in Virginia, and then Oregon, so Arizona felt very far away.) I was excited to add it to my itinerary on this trip, as one of several cool Southwestern “experimental” ideas from the latter half of the 20th century, including the Earthships in Taos and Arcosanti, north of Phoenix.

After the sweet potato fries, I biked about another mile to my Warmshowers host’s house. The host, Kyle, is actually out of state right now, but very graciously offered their home to me anyway. (This community is amazing!)

I arrived at the house in time to sit outside in the sun a bit with some snacks, and now I think I’m going to call it an early night, and get some much-needed rest. 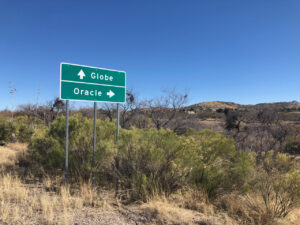 Today was the day! After knowing of this amazing venture for more than 30 years, I finally got to set foot in the actual place today. It was so cool!

The day started when I packed up from my Warmshowers host’s house, then pedaled over to the table outside the Oracle library to post yesterday’s blog on the library’s public WiFi. Then I headed back down the road, about ten miles, to Biosphere2.

The first part of the ride was incredible. A few days ago, I rode uphill for about 23 miles, with a headwind for about the second half of it… today I got a taste of the reverse of that, and it was glorious. I didn’t need to pedal at all. I glided down the smoothest pavement ever, in warm sunshine, for several miles.

Sadly, I very nearly wiped out when this smooth pavement came to an abrupt end on the shoulder. The motorists still got to enjoy the buttery road surface, but cyclists were forced off (across a rumble strip, no less—yikes!) onto very rough pavement. This sudden maneuver made me swerve multiple times, especially since my speed was higher than normal on the downhill, and I just barely managed to remain upright. This rude infrastructure awakening put a damper on my mood, especially since that terrible road surface continued for another mile or so before I reached the turnoff. 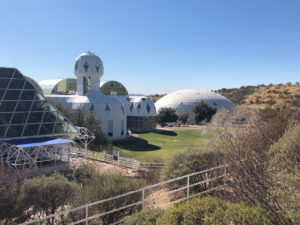 But once I arrived at the destination, my focus shifted and my mood lifted.

I met my Portland friend Andie, who is in grad school for nursing in Tucson this year. She drove up to meet me at Biosphere so that we could enjoy the tour together.

The Biosphere walking tour lasted about an hour. It was a self-guided tour with prerecorded videos from two “tour guides” on a special app. It was very informative, and I found it exciting and surreal to be walking in the actual location where eight people were sealed into a futuristic science experiment for two years, about 30 years ago. We got to see the kitchen and dining room, one of the apartments, and many of the made-from-scratch natural biomes, including a savannah, a rainforest, a coastal fog desert, and even a mini ocean. 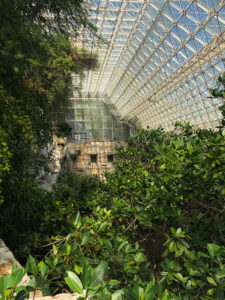 We got to tour the orchard where they grew fruits to eat, as well as coffee, although the latter proved to be much more labor intensive than they had anticipated. Apparently the Biosphereans had insisted that coffee be available to them inside, and since everything had to be generated from within, they decided to grow, harvest, and roast the beans themselves. Because of how much time and effort the process ended up taking, they only had a cup of coffee each about once every two weeks.

I’m so glad I got to visit this place. Now, a few more days enjoying Tucson before I hop on the train to head east to Texas.

Follow Maren’s journey on her blog; Dream into Change