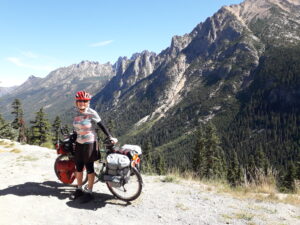 Tears in my eyes, I had had enough.  On two wheels crossing the upper Midwest, I was nearing the end of my journey.

I had already been up the Road to the Sun in Glacier National Park.  Nothing could be more difficult than that, could it? Lake Koocanusa in western Montana pulled the mask off my hubris.  The road taking me down its eastern shore was hilly, and a strong canyon-funneled wind slowed my forward progress to a crawl.

Six hours into the day’s ride, my rear tire flatted.  I never should have left Maine without new tires.  I patched the inner tube but could not find the cause.  Sure enough, the tire went flat again in less than five miles as the sun sank lower.  There I was on the side of the road with the rear wheel off the bike and the tire in my hands.  I squeezed every inch of it to find the cause, the tears in my eyes and the silent “Why?” screaming in my head making the task that much harder. . . .

How many times in my life have I patched bicycle tires on the side of a road?  Riding a bicycle and being transgender are intimately related in my life.  If not for the former, I might not have coped with the latter during the decades it took me approach and finally succeed at transition.  I learned to be visible and assertive in my lane position on a bicycle, and those skills transferred directly to being visible and assertive when I transitioned at the U.S. Embassy in Bucharest, Romania, in 2010-11.  Experiencing two flats in a row that day by Lake Koocanusa reminded me that our life journeys, whether on a bicycle or in asserting gender identity, remain unpredictable even after we have accumulated years of life experience.

All through the winter of 2019-20, I had planned a cross-country bike-packing journey.  Given that I live in northern Maine, I had designed a route across Ontario and Quebec that crossed back into the US at Michigan.  From there I had planned to cross Michigan’s Upper Peninsula and continue across the Northern Tier states to Anacortes, WA.

Then Covid hit.  The world as we know it went away.  The Canadian border closed, and even Adventure Cycling urged its members to stay home for the common public health good.  An unabashed northeast progressive, I complied and abandoned my plans.  Instead, I set out on May 31 to bike only around the state of Maine.  At no point would I be further than a few hundred miles from home.  I told friends this was my Bike Around Maine or BAM, a wry allusion to the Soviet Union’s Baikal-Amur Mainline railroad.  I found myself watching YouTube videos of the controversial, tragically naive American folk singer Dean Reed playing his guitar and singing This Train on top of a BAM railroad car in the 1970s.

That was my reduced plan, but a funny thing happened as I passed through Brunswick, ME.  I met up with a bike-packing friend who urged me to reconsider.  After all, she said, “What could be more socially distant than riding solo on a bicycle 6-8 hours/day and then camping at night?”

I mulled that over for several days as I continued north to the Canadian border that I could not cross.  Infection rates in the upper Midwest were low as we headed into summer.  I might not be able to cross Canada, but I could strap Woodswoman II on the back of my car, drive to Michigan, and start riding west from there.

So it was that I rode forth from Marine City, MI, on June 24.  Each day I rode 60-80 miles across grassland, prairie, and mountains.  This retired Foreign Service Officer who has seen more of the former Soviet Union than she has of the United States finally got to see her own country.  I had never been in Minnesota, North Dakota, Montana, Idaho, or Washington State.  I rode through rain and heat and battled mosquitoes.  I stayed at cheap motels and at primitive campgrounds where wading into a lake or stream was the only shower available.  I climbed the Road to the Sun and four high mountain passes in the Cascades.

People were kind.  Camp hosts found a spot for me at campgrounds that were full.  One campground host in Montana brought me a home cooked dinner.  A retired Lutheran minister drove over a hundred miles to bring me a new front tire when I needed one. If our national public health policy dictates staying close to home for another year, so be it.  I’ll do my part.  I long for borders to reopen and to visit friends in Kazakhstan, Romania, Russia, and Uzbekistan.   I look forward to other bike-packing adventures.  In the meantime, I will take solitary winter walks, read my books, and enjoy the beauty of a Maine winter.  I will think back on the summer with a smile.

But let me return to that day along Lake Koocanusa.  Getting control of my tears, I found the culprit that had caused my flats, a small piece of wire that had worked its way through the tire wall.  I used eyebrow tweezers to extract it.  A half hour later I pulled into a Corps of Engineering campground south of Koocanusa Dam.

The first person I saw was a woman with her dog standing outside what turned out to be a school bus turned camper.  She invited me to set up my tent next to her bus.  She brought me cloths and a basin of warm water with which to  wash away my day’s accumulation of grime.  With the sun now set, she invited me into her bus to warm my dinner on her stove, and we whiled the evening away with tales of our travels.  I went to sleep that night with a smile.  My new friend had turned my worst cycling day into one of my best.

That is what I take with me from this summer’s adventure.  During three months of contending with physical challenge, heat, wind, mosquitoes, and storms, I had faded the political news into the background.  As different as we may  be in our politics, people are kind.  People help each other.  There is still inherent good in this country.  As we head into 2021, may we all reconnect with that goodness.