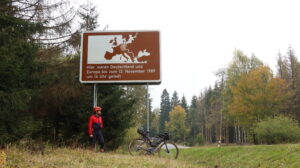 When I returned from a bikepacking journey in Kyrgyzstan in 2019, I published ‘No Stone Unturned’, a short film documentary that follows my journey through the wilds of the Tian Shan.

The editing of the film coincided with the 30th anniversary of the fall of the Berlin Wall, so on that evening, I took some time off from working on the film to write down my ‘Thoughts on 9 November’. Working on the film triggered memories from my past, as I was often reminded of my childhood cycling through the southernmost country of the former Soviet Union. Lenin statues, harvesting machines that used to roam the fields in East Germany, and a village called ‘Rot Front’ – often the cycle though Kyrgyzstan felt like traveling through East Germany. There was little on the shelves of rural shops too.

For me, cycling is freedom, and the very freedom to be able to travel to remote countries like Kyrgyzstan was handed over to me on the 9 of November. Peacefully but forcefully, the people of East Germany brought down a restrictive and brutal regime. There were other political movements that coincided, but it was ultimately the bravery of the people that took to the streets and gathered in churches to make their voices heard that helped to close this chapter of German, and shortly afterwards, European history. First, the Berlin Wall fell and the rest of the Iron Curtain followed suit shortly afterwards. The heavily fortified border between East and West Germany had lost its purpose. 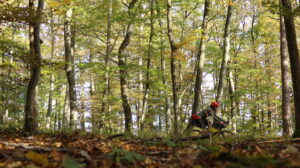 A bit more than 30 years after the reunification of Germany, which happened on 3 October 1990, I mounted my bike to retrace part of the former border. I grew up in the Eichsfeld region, and I was 10 years old when the wall collapsed. Since then, I have spent two years working in New Zealand, I travelled and worked in the US for a while, and for almost twelve years now, I call Scotland home. I also spent a year circumnavigating the world on a singlespeed bike. Next to integrity, that freedom ranks highest on my list of values.

I always enjoy visiting Germany, especially by bike. One of the outstanding moments on my round-the-world trip was when I first spotted a sign with reference to the former border in the Rhön. With shivers running down my spine, followed by tears of joy immediately afterwards, I realized that the opening of the inner-German border was THE historical event without which this trip would never have been possible. 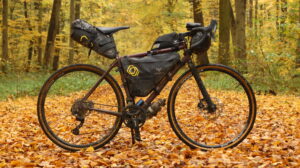 Although it often sounds cliché, cycling around the world, and relying on the kindness of strangers, often through Warmshowers, showed me for a year that there is much more that connects us than that separates us. We all feel the same; we all need to eat; we all want to be treated fairly and respectfully.

Over the past few years, I have made a living from developing long-distance bikepacking routes in Scotland through Bikepacking Scotland and have inspired people with my projects to learn about the history of the country through cycling. I wanted to use this experience to bring my home country closer to more people. So, it made sense that a route along the Iron Curtain was the first bikepacking route project in Germany, especially since I had Schwabe, a German company famous for its Marathon tires, as a supporter for the project. 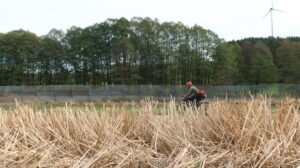 The established long-distance cycling route EuroVelo 13 retraces the Iron Curtain, running roughly 10,000km from the Barents Sea in the north to the Black Sea in the south. I would highly recommend the Bikeline Cycling Guides from Esterbauer that detail the route and its history; they give a great insight not only into the route but the unique history as well. The Berlin Wall Trail, described in a separate book, is another great cycling route to discover the history of the German capital.

While both routes were designed with touring bikes in mind, I was inspired by the fantastic opportunities that Germany offers for off-road touring. My choice was a gravel bike from Tout Terrain, a small manufacturer based near Freiburg. Loaded with bikepacking bags from Apidura, it was the ideal bike to be a little faster on the longer paved sections, but at the same time very able to navigate the parts of the route that take me into nature off the beaten track. Contrary to what marketing departments might want to make you believe, gravel bikes are nothing new. I bought my first gravel bike in 2010, so far ahead of its time that the company (Swobo) unfortunately no longer exists.

All details of the route I cycled, named the Iron Curtain Gravel Trail, can be found on BikePackingGermany.com. I used my tour to refine the route which I had planned with Komoot where needed, but also to produce Grenzerfahrungen (Borderline Experiences), a film that tells not only the story of my ride, but also takes you a little bit further into my own personal story. Unlike my last two films, Unhurried and Drovers, the film was made rather spontaneously. I only had 8 days to cycle almost 800 km while filming and taking photos, as I wanted to travel back to Scotland before the re-introduction of travel quarantine. Cycling 100 km a day and spending at least two hours filming often pushed me to my limits – the title is deliberately chosen to be ambiguous. The film is inspired by my father’s interest in the history of Eichsfeld, which is inextricably linked to the inner-German border. My father passed away after an accident on his bike during my round the world trip, and although our life plans were very different, I am grateful for his inspiration. I think he would have supported and watched the film with interest.

I hope it excites you to travel to Germany in the near future to experience the route and its history in the same way the events of the 9 of November excited me. As a 10-year-old child, I was ready to dive into a new world. On the morning after the Berlin Wall was opened, I was standing with my favorite plush toy at the window of our apartment building, the infamous Plattenbau, when my mother came into the room. Then everything went very fast. Getting dressed, breakfast, in our Trabant and suddenly we were in the west. More than 30 years later, that memory hasn’t faded, and I don’t think it ever will.