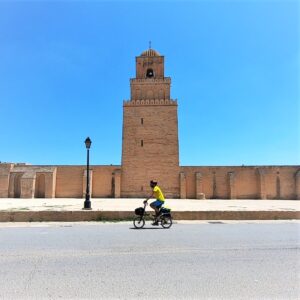 Last year, I cycled for over 1,000 km from Sidi Bouzid, in the heart of Tunisia, to my hometown in central Italy, Archi.

I did it to support the organization Vélorution Tunisie which promotes cycling and sustainable mobility. They wanted to launch a project of bike education in primary and secondary schools across the country, and I decided to help them with a fund-raising campaign linked to my bike trip.

I chose to start my journey in Sidi Bouzid because of what this place means for Tunisia and the rest of the world. Ten years ago, right there, a young street vendor named Mohammed Bouazizi set himself on fire after the police brutally harassed him, pushed over his vegetable cart, and confiscated his scales.

Mohammed would die a few days later in hospital. By then, from Sidi Bouzid, a revolution had spread throughout the country and reached the capital Tunis. Tunisia’s dictator, Ben Ali, fled the nation a few days later. He was never to return. What would later be known as the Arab Spring swept through the entire region and changed the course of history forever. 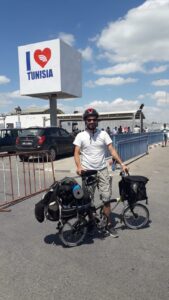 From Sidi Bouzid, I cycled to Kairouan, Tunisia’s early medieval capital. The city was founded after the Arab conquest of Ifriqiya, modern-day Tunisia, in the 7th century AD. The Medina of Kairouan is an excellent place to explore by bike. Even if you have not yet visited it, you might have probably seen its streets in the film “Indiana Jones and the Raiders of the Lost Ark,” the famous fight scene was filmed there! 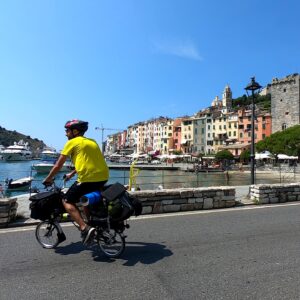 I continued my journey to Zaghouan, a city known since Roman times for its water springs. From Zaghouan, I then cycled all the way to Tunis on the Mediterranean shores. Three days and three hundred km later, after a journey through history, I finally reached Tunis, where some days later I boarded a ferry to Genoa in Italy.

Crossing the Mediterranean was an experience loaded with emotions. A few minutes before dawn, I woke up in the belly of the ship that was taking me back to Europe. I did so just in time to witness a wonderful event: sunrise over the Mediterranean Sea.

Those images captured all the hope of a journey back home, but I could not help thinking of those fleeing their homes because of persecution, violence, injustice, and poverty who, instead of finding hope, have lost their lives in these waters.

From the historic port of Genoa, where millions of Italians left the country throughout the nineteenth and twentieth century, I pedaled for the rest the way through the beautiful landscapes of Liguria, Tuscany, Umbria, Lazio, and, finally, my own region Abruzzo. 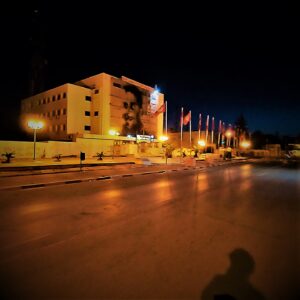 While in Italy, even before the deadline, our fund-raising campaign reached and exceeded its goal! I would like to thank once again Vélorution Tunisie for all that they do promote cycling (including providing hospitality to fellow bikers through Warmshowers!) and those who supported us.

After cycling through Italy, I continued my bike trip in Slovenia, Croatia, and Bosnia-Herzegovina, where I unfortunately had to suspend it due to the worsening pandemic. I hope to be back on the road when things get better!