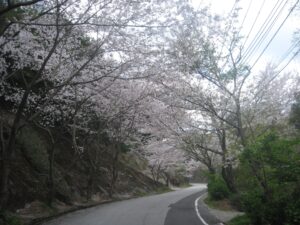 The guard at the campground entrance turned us away; it didn’t open for the season until the following week!

It was early April in Kyushu, drizzling and unseasonably cold. After a soggy day of cycling through the stunning Yabakei Gorge, we were eager to park our bikes, dry off, and warm up in a facility with a sheltered camp kitchen. Our afternoon tea would have to wait.

It had been a great day; we’d been cheered on all day by pastel-pink cherry blossoms brightening the deep green forest, but now we’d be pitching our tent in the damp, wet dark. And there’d be no open campfire, too dangerous in woods this thick. 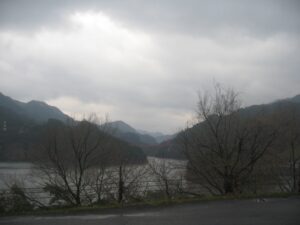 My husband Jim turned grumpy; his “free-camping” standards were much higher than mine. Until camp was set up, he would be anxious, insisting we be far enough away from the road that no one knew we were there. He would not sleep well if he thought we might be discovered. It had to be a spot relatively flat and open enough to push our loaded bikes into and out of the woods. Me? I love to free camp and didn’t worry because I figured he did enough for both of us.

As we slowly searched for a good opening into the forest, a vehicle approached. Quickly we picked up our pace. A tiny white van slowed down – oh no! – were we going to be busted by Park Patrol, ordered to move on, no camping allowed? A slight man in scruffy clothes got out. He spoke no English but signed to us. “Are we trying to camp here?” His eyes were kind. Jim shrugged and admitted, “Yes.” Then the man took out a pen and paper and drew a house. “Would we like to come and spend the night at his home?” We looked at each other with a sense of relief, then turned to him and, in unison, said, “Sure!” He gestured for us to follow him.

Major mood change! We smiled and hopped on our bikes. Minutes before, we were bedraggled and discouraged; now, we were once again happy campers. In our excitement, we pedaled harder and faster than typical, but my thighs didn’t even complain – we were going to be indoors and warm that night, thanks to this kind man. 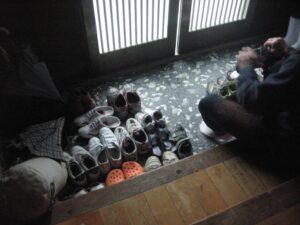 Ten minutes later, we stopped in front of a secluded one-story home surrounded by steep rows of tidy, crisscrossed logs teeming with shiitake mushrooms. Our host lived here with his parents, wife, two daughters, their husbands, and three grandchildren, each nuclear family having one bedroom. The house was a great big square doughnut, with the bedrooms, kitchen, and bath around the perimeter, and a central room filled with beautiful objects, art, family portraits, and a Shinto Kamidana shrine. They put us in the shrine room with their many ancestors staring down at us. But we didn’t mind; we knew it was going to be a dry, warm, and memorable night!”