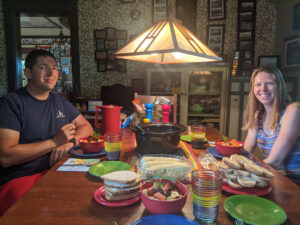 Part of the fun of hosting long-distance bicyclists for me is to feed them when they pedal up hungry after a calorie-burning ride.

Sitting down to a home-cooked meal is often a treat for riders who have dined solo on fast food or from gas station snack bars or cooked over a camp stove while stealth camping.

Even folks who do not usually think of themselves as cooks can whip up a feast with less effort than most think. The resulting conversations around the table will be worth the time to make the meal.

One time, I hosted a young Korean guy who had limited English skills and a guy from inner-city Milwaukee. They had briefly met on the road before, but this was the first time they had ended up at the same home at the same time. Moon, the Korean, was sitting across from Misha and kept staring at his hair. He finally got up the courage to ask, “May I touch your hair?” Moon had never seen dreadlocks in person, and Misha’s 28-year-old mound of them intrigued him. Misha took it in stride and allowed Moon to touch the locks. I sat and chuckled.

Three middle-aged French guys pedaled up. Two had some English, but the third could not speak a word. My French was limited; therefore, much of the conversation was translated so we could all participate. The non-English speaker had never been served corn on the cob, and his fellow bikers had to show him how to eat it.

I enjoy cooking and state in my profile that I want to fix my guests things they are craving. Some riders are on limited budgets and may not be eating all that well along the way. Others might be picky eaters and not able to find what they crave. Some meals are simply not available along the road.   So I ask my guests to tell me what they want or if they are, for any reason, on a restricted diet.

Several vegetarians have shown up at my door, and I find ways to accommodate their meatless cravings. 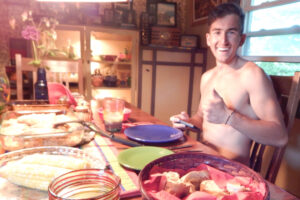 I have found that if there is a mixed group of vegetarians and omnivores, they have often been served just vegetarian meals along the way. As an omnivore myself, I like to have meat with my meal, so I try to have meals that both parties feel well fed. If you are in a vegetarian household, it is totally okay to serve your regular meals; the omnivore will survive but might snack on a beef stick later, so don’t freak out.

One young Korean guy responded, “Steak, haha, and white pasta” to my question of what he wanted to eat. He was shocked when I pulled out a sirloin steak to grill and fettuccine alfredo. I guess he thought there was no way I would serve steak, but it sounded good to me too.

Here are some tried and true tips to help you feed the hungry beasts.

Arrival times can change due to circumstances beyond the rider’s control, so having meals that are forgiving on timing helps—also, having side dishes that you just need to set out from the fridge is important. 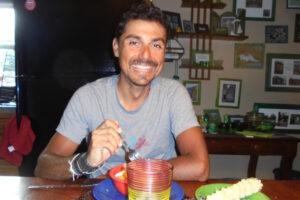 I find fresh fruit of any kind very popular. It does not matter what you have on hand; cantaloupe, honeydew, strawberries, and pineapple are available year-round. Then seasonal fruits, like watermelon and various berries, can be added as availability allows. I like to serve them in individual bowls, but a shared serving bowl is fine. At the last minute, slice up bananas (they go brown if done early). A dollop of yogurt adds flavor, and then my secret ingredient gets sprinkled on; crystallized ginger. Just a few pieces on top adds zing. It is fun to have people guess what they are eating. So don’t tell them what it is until they have a guess or two. A bag of mixed frozen fruit will also work. Serving it still slightly frozen works best.

Fresh veggies to snack on are always a good addition to the table. Celery, carrots, green onions, broccoli, cauliflower, green peppers, and even radishes are healthy munchies while the main course finishes. A bottle of ranch dressing can be added for those that prefer their veggies dressed. Corn on the cob is popular and easy to fix.

Serving single hot main dish courses simplifies the timing. A few popular ones covering food groups’ bases are baked spaghetti, shepherd’s pie, and lasagna. They can also be adapted for non-meat eaters easily by making two pans. And all hold for a while covered on warm in the oven if needed.

Here are some basic recipes that have been devoured around my table. Think big servings, too; they will be hungry.

Middle – layer the following to about ¾” thick:

Bake until the cheese melts on top. Flipping the oven to broil for the last few minutes will lightly brown the cheese. Vegetarian adaption; substitute frozen spinach for the meat.

Shepherd’s Pie (Or cottage pie if you heed the Scotch who insist it is only shepherd’s pie if you use lamb.)

Brown the ground beef with the onions and seasoning. Add the gravy mix and water and simmer until water is absorbed. Spread in the bottom of sprayed 10×14″ pan.

Bake until the cheese melts. Vegetarian adaption: omit the meat and put the mashed potatoes on the bottom, topped with an additional layer of cheese, then add the veggies and more cheese.

Dessert can be anything. I usually find after a feast, everyone is full, but it is nice to have something sweet on hand for later cravings. Homemade is fine, and so is a box of Oreos.   I have found that my European guests very much enjoy my homemade rhubarb crunch using rhubarb from my garden.

If you have not fed your guests a homemade meal, I strongly urge you to give it a try. I can assure you that your efforts will be very much rewarded.